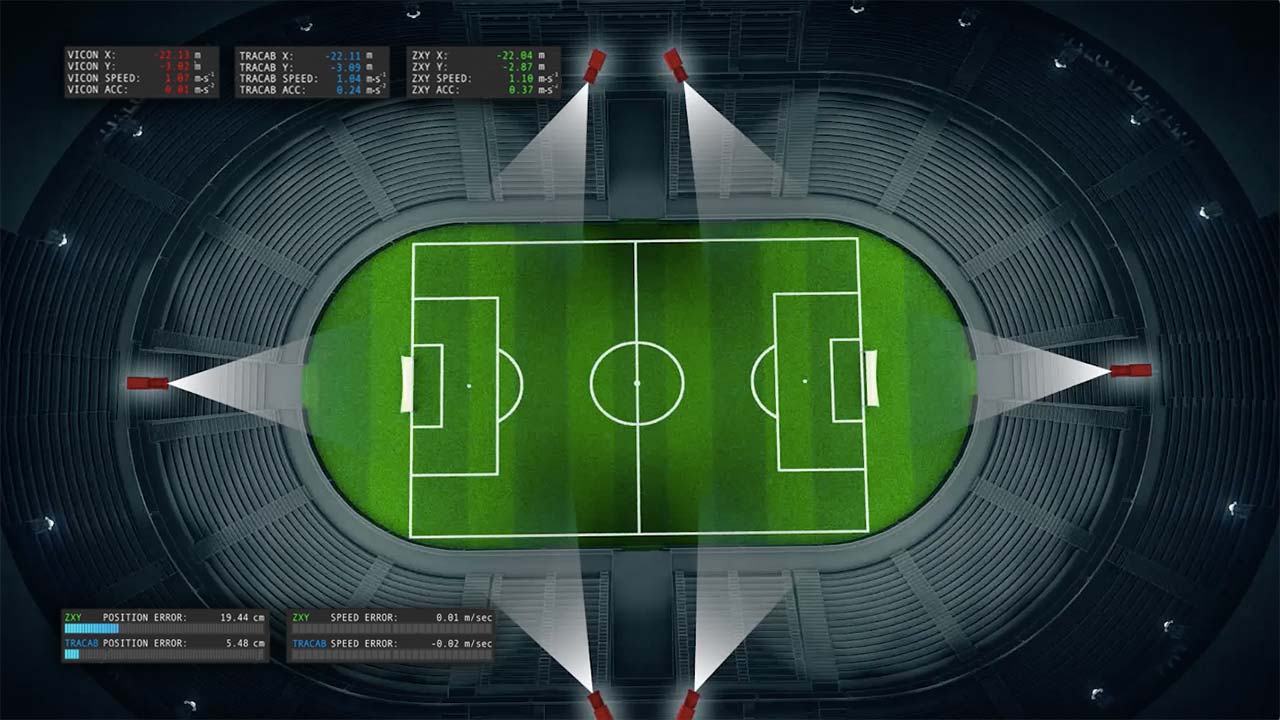 STOCKHOLM — Dec. 20, 2018 — ChyronHego today announced that its TRACAB Optical Tracking System, the world’s leading technology for tracking players and balls within competition sports, achieved the highest accuracy results of any comparable system based upon scientific tests conducted by the Technical University of Munich, which is highly regarded for its research in the field of motion capture.

The tests, commissioned jointly by ChyronHego and the DFL Deutsche Fußball Liga (German Football League), were designed to measure the accuracy of the systems for collecting data during play — a capability that has implications for physical and tactical coaching, as well as for broadcast, digital media, and more. The results not only provide independent validation of TRACAB’s accuracy in capturing sports data, but also give ChyronHego valuable information it can use to further improve upon the current system and refine the next generation of TRACAB.

The tests took place at Düsseldorf’s Merkur Spiel-Arena, home to one of the German Bundesliga’s football teams. Players were tasked to run around the football pitch performing designated movements such as lunging, accelerating, decelerating, changing direction, and so forth. The researchers carefully constructed the test to ensure it included all of the kinds of movements that would typically take place in a real game so that the football industry would view the results as being representative of the real world.

During the tests, players were tracked using the TRACAB patented real-time image-processing technology and also with unique radio frequency ZXY tags mounted on their clothing. The result was that data could be captured simultaneously from both technologies within these tests and then be compared independently with Vicon, the gold standard. The tests also enabled comparison of data from each system to help achieve even closer consistency between the datasets.

Extensive examination and analysis of the test results showed that both ChyronHego systems performed extremely well and achieved very high accuracy levels. Moreover, the Technical University of Munich concluded that TRACAB was by far the most accurate tracking system of all optical and wearable technologies that the researchers have tested so far, including many other well-known systems, and that the ChyronHego systems exceeded the performance of certain technologies considered to be gold standards.

“At the Technical University of Munich, we are frequently engaged by technology companies and football organizations such as ChyronHego and the Deutsche Fußball Liga to assess and validate the accuracy of their tracking systems. To achieve this, we need to use the highest performance measurement tools, and this is what the Vicon technology provides to us as researchers. The assessments we have performed on ChyronHego’s tracking technologies helps the company to better understand what level of performance is being attained and how it can be further improved. The result of these assessments found that the measurement accuracy of the TRACAB system was comparatively better than what we’ve been testing so far in the market,” said Prof. Dr. Martin Lames, at the Technical University of Munich.

The results prove that sports leagues and other users of sports data can be confident in the TRACAB system’s ability to deliver actionable data within competitions with pinpoint accuracy. Furthermore, for ChyronHego, the tests achieved two things. First, they provided independent validation of just how accurate TRACAB tracking technology is by comparing it against the most accurate system on the planet. Second, the tests provided insight that will enable ChyronHego not only to refine TRACAB even further in future generations of the system, but also to get better alignment between its other tracking technologies.

“It has been of great importance for us within the Bundesliga to constantly push the boundaries of accuracy and quality of data from our player performance tracking technologies. This is crucial to ensure that the growing number of applications that rely on this data, in both the professional and media spaces, can be confident in the resultant statistics and analytics that are derived from this data. We therefore needed to get an independent validation performed by a highly respected research organization, like the Technical University of Munich, to provide us with an objective assessment of how the current technology performs,” said Hendrik Weber, managing director at Sportec Solutions, a DFL subsidiary.

With this in mind and to accelerate and shape its innovation, ChyronHego not only tested its current version of TRACAB but also a prototype of the next-generation technology. With video having been captured from the same tests, ChyronHego has a gold standard dataset it can use to measure the incremental improvement it continues to make upon its computer vision algorithms and artificial intelligence (AI) engines, which have been key components of TRACAB for the past 12 years.

“Our customers are already aware of the benefits that live, real-time data can bring to them in powering a range of applications. As the data is captured live, we are often challenged by the sports science community to prove how accurate the data is. We have always known within ChyronHego that the quality of the tracking data is second to none; however, we needed an independent analysis to be done by a respected scientific institute to confirm our view on this. We contacted the Technical University of Munich, and we are really satisfied that their tests showcase to the world how accurate our tracking technologies really are,” said Ian Wray, ChyronHego’s sports industry director for EMEA and APAC. “But in a competitive market, we can’t just be complacent and assume we’ll always be the most accurate. We need to constantly improve if we want sports organizations and their numerous stakeholders to continue relying upon us. So, for our own development purposes, these tests have also shown us how we can work internally to make our tracking technologies even more accurate and consistent than they already are.”